Pop Culture With An Edge

On March 21st, Sony CE and Sucker Punch Productions released Infamous: Second Son, the first PlayStation 4 exclusive. Having only AC: Black Flag and free downloadable indie games like Don’t Starve to keep my attention, I have to admit, I was eager to finally play something specifically made for the PS4. I was hoping to, at least, get a hint at what new and interesting game play doors could be opened by a next-gen system. This, however, was not the case. read more

5 Reasons You Should Be Psyched About “Dredd 2”

Who is Judge Dredd?

The year 2012 saw the beginnings of a resurgence in science fiction film reboots and remakes.  We’re caught in the trend now and there’s no end in sight (kudos to whoever can guess how soon we get another Total Recall remake). It’s a good thing in some respects, though, as films that didn’t pan out the first time around are getting a second chance.

Take Judge Dredd, a 1995 Stallone vehicle that left the franchise untouchable (in a bad way) for two decades. It had the look, but it didn’t come close to nailing the nuances and that’s why this sci-fi blunder exists. Lucky for us, Judge Dredd would get another chance. But, before we get there, let’s take a quick step back and explain where Dredd really began. 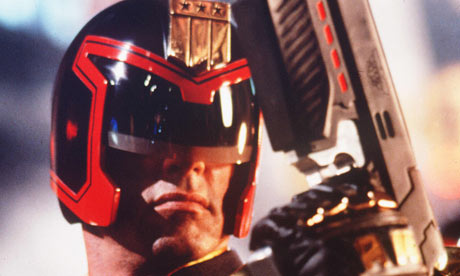 The impact of late night television used to be in its so-called “watercooler moments,” a funny bit or a dynamo performance that left people talking about it the next day at work. But the sands have shifted. This is the dawning of the Age of the Viral Video and late night has become its biggest producer. It’s a stunning shift in conventional thinking and possibly the first and only example on television where a network has actually embraced the changing way people consume TV, rather than to desperately fight against it. The new thinking is this: Sure, people may not watch The Tonight Show or The Late Show when it airs, but they sure as hell will click on a video of what happened the next morning when its all over the internet. Nobody wants to feel like they are being left out. read more

5 Ways ‘Batman Beyond’ Predicted the Future

What is Batman Beyond?

Batman Beyond was a Warner Bros./DC Animated television show that aired from 1999 to 2001. It was a futuristic, cyberpunk reimagining of the Batman legend. The story takes place 40 years in the future in Neo-Gotham, a dystopian, neon lit, post-industrial cityscape. Gotham is worse than ever before. There’s a general feeling of malaise hanging over much of Neo-Gotham’s citizens, and the rest are criminals and hooligans who represent a breakdown in the social order. The story follows Terry McGinnis, a Hamilton Hill High student who, with the help of an elderly but badass Bruce Wayne, carries on the Batman legacy.

This week’s installment finished the six episode set up, for what is sure to be an emotionally-intense season finale. All of the interviews have concluded, the narrative is officially in the present, and fans are on the edge of their seats eager to see how the show will end.

Episode 7 begins with Marty and Cohle sitting in a bar. Marty asks “why am I here?” forcing Rust to get to the point. Cohle opens with the Lake Charles murder, and how it had been kept from the papers saying “If they’d cover that up, who knows what else they might have covered up,” justifying the need to keep his investigation under wraps. Marty is unconvinced it’s worth getting back into and as he begins to leave Cohle says “You have a debt, because of the way things went down in ’95.” This is a reference to Marty’s impromptu execution of Ledoux. Though Marty seems reluctant to even entertain the thought that Rust isn’t crazy, he is convinced to at least see what Cohle has in his storage shed. read more

When we talk about comic book films these days, we’re also talking about big budget, studio tent-poles. A lot is riding on these movies so when a studio wants to cast someone to be in one of these films, you can guarantee it is a calculated decision. It is one that ensures it pulls in an audience either through big name talent or just by making one hell of a casting move and getting the perfect person to play the role. In this article, we’ll be talking about the latter. read more

DC/Warner Bros. continues it trend of comic book inspired TV shows, this time with NBC’s Constantine. It’s been a busy week for the comic publisher as their scarlet speedster, Flash, recently had a picture revealed for the live action TV show. Now we have NBC announcing 3 new actors for their show Constantine – Charles Halford, Lucy Griffiths and Harold Perrineau.

Charles Halford is set to play Chas, a character from the Hellblazer comics; Lucy Griffiths will play a young woman named Liv; and Harold Perrineau will play Manny, an angel who takes a proactive role in watching over Constantine. read more

From what we can glean here, Winter Soldier has everything going for it: top of the line special effects, government intrigue and high octane action! We probably knew most of this already, but these new clips and scenes of dialogue certainly help put the pieces together and make this film take shape. read more

We Could Be Seeing a New Matrix Trilogy Very Soon

There may be more Matrix on the way. Latino-Review has announced that the Wachowski siblings are hard at work on a second Matrix trilogy! The new films are set to begin being released in 2017, a crowded year that also promises the new Star Wars film and the latest Avatarsequel. Warner Brothers, which owns the rights to the Matrix, appears to be hoping they can compete with their own brand of popular older movie harvesting. read more

It’s another round of The Walking Dead Drinking Game so get out your Solo cups, shot glasses, and maybe an object capable of inflicting blunt force trauma to a rotting, shambling corpse, because we are going to party like it’s zombie arena fight night in Woodbury.

1. Drink any time Beth inexplicably reads her diary in a voice over

2. Drink any time Daryl straight-up stabs a zombie in the head with an arrow read more